Clutter. I can’t stand it. Call it OCD if you want, but it drives me crazy. I need a way to rid it from my life forever. But how? Each day after getting the mail, I spent too much energy, after a long day at work, to decide what to keep, and what to throw away (#firstworldproblems, I know). A credit card bill? I don’t need that, I can just look online. A few days later I need my account number as a result of my sign-in credentials no longer working. Why’d I throw that away? Dagnabbit! Ok, so I’ll keep that from now on. Now I check my pockets and find a bunch of crinkled-up receipts. I don’t need them, I’ll never need to return it or check warranty info. Famous last words. The problem is paper causes clutter. Maybe not all clutter, but a large percentage of it. I just can’t win.

One day, while in the midst of dealing with my OCCD (Obsessive compulsive clutter disorder), I discovered hope. A blog titled “Going Paperless” written by Jamie Todd Rubin. I was intrigued when I read about his use of Evernote to capture everything, so I decided to investigate further, and that’s how it all began.

The Magical Box of Everything™

Imagine, if you will, a world without paper. Envision being worst packrat in history, but at the same time hide all traces of those packrat tendencies from friends and family. Imagine you have a box in your attic that holds an infinite amount of junk. All you have to do to access one of these treasures is just say “give me that item!” Boom! You have your item. So why go paperless, you ask? Conceivably, because that magical box is exactly what you’re getting (saying “boom” when you find something is completely optional, but highly encouraged). The key, however, is to make sure you and your magical box speak the same language, and that’s precisely what I’d like to take some time to explain. My approach certainly isn’t the end all, be all, but it should get you started if you decide to go down a similar path of ridding your life of paper. A lot of my workflow has been adapted from Mr. Rubin, so I send him lots of due credit, but I’ve changed things to make it work better for me, and I encourage you to do the same.

Rule #1, keep everything. As long as it’s labeled, tagged, and titled correctly, you can just search for it later. Rule #2, don’t make it complicated. If it’s too complicated, it’ll never work. Think about a diet that’s immensely complicated. You need to measure this, measure that, compare it with a book, then compare that to a label. Ugh, that’s a lot of work! While that works for some people, most of us just need something simple and sustainable. I’ll mention some ways I combat complexity so organizing your box is insanely simple. Gone of the days of opening, reading, and sifting through your pile of mail at the end of a long, hard day!

What do I need?

For the majority of this article, I’ll explain how I manage everything with Evernote. Do I think Evernote is the only way? Not at all. I started with Dropbox, but found Evernote’s ability to tag documents ranging from plain text to PDFs to images a superior way to get organized. It’s not the only way and certainly can be adapted for other platforms and applications.

If you want to get real serious about all this, and be a “Paperless Jedi Master,” you might want to consider obtaining a scanner. I went with Evernote’s ScanSnap scanner, but you can surely get away with something much cheaper. Also, the Scannable app from Evernote does a great job. The bottom line, if you’re scanning a lot of paper, a scanner is recommended.

Keep everything, find it later

The key to keeping everything is the ability to find it later. Evernote is already great for searching, but there are certain tricks to making finding documents a breeze. Tags are your friend, not notebooks. A lot of people, myself included, start organizing their notes in Evernote via notebooks – a notebook for tax documents, one for pets, one for your job – you get the idea. The issue with having a crap ton of notebooks is the added complexity, which I’ll talk about later. The advantage to tags is the ability to place multiple of them on a single note. One thing Rubin discusses in his blog is thinking about tags in terms of who and what. Translate “who” and “what” to topic, type, and project. Here’s an example of what my tags in Evernote look like (pro tip: notice how they’re all nested, too!): 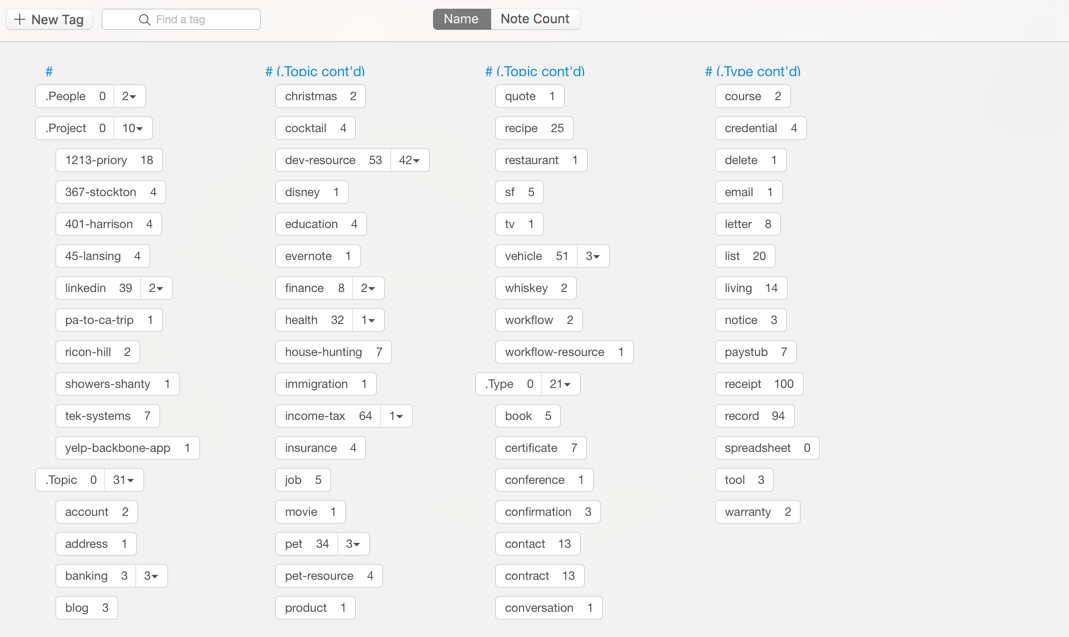 A couple of rules I always try to follow when adding new tags:

If I had to name the single most important strategy to being successful with keeping everything organized, I’d have to say it would be coming up with a process that’s frictionless for adding new items, not time consuming, and doesn’t require a ton of thought. Coming up with tags for each note can be tricky, and it requires thought. So how do I eliminate all of that? I come back to it later – once a week to be precise. I highly encourage thinking about doing it in this manner, even if you’re just a casual Evernote user and get nothing else out of this – make composing new notes simple and painless.

Remember I talked earlier about having very few notebooks? Here’s my list: 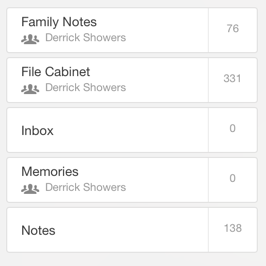 I have 5 main notebooks: Family Notes, File Cabinet, Inbox, Memories, and Notes. Let’s start with Inbox. This is the key to making things simple. All notes start in Inbox. It could be a simple grocery list, or a letter scanned from today’s mail, or something clipped from the web. Doesn’t matter, it goes in Inbox. One of my biggest issues with Evernote was that I was afraid to create new notes because I didn’t want to mess up my organization. Now I don’t have to worry – throw it in Inbox and categorize, modify, or delete it later.

The only “chore” with this method is going back to cleanup. I add it to my calendar as a weekly occurrence. It usually takes no more than 15 minutes, during which time I may decide to combine a note with an existing note, add some tags, or change the date (I try to keep the “created date” the same as the date on the document), or delete it all together (this happens quite often – you tend to decide what you thought was important a few days ago really isn’t).

As far as the other notebooks, this is what works for me.

Other tricks of the trade

Now that I covered the important stuff, I want to take a few minutes to talk about some other features of Evernote I utilize to keep things in order.

Reminders. For the most part, they suck (sorry Evernote). At one point, I tried using them instead of a todo list, but quickly realized I was missing everything – kind of defeats the purpose of a reminder. However, they do have their place – a list of “reminders” for notes to come back and check on. Notifications are no bueno (part of what attributes to their suckiness), so it takes checking my list of reminders from time to time (for some reason if you set a reminder on the desktop app, it doesn’t consistently notify you on the mobile app and vice versa – super lame!). Here’s a great example, though. Let’s say you just scanned your car’s oil change receipt. Set a reminder for 3 months to remind yourself to take it back for another. For those of you who own a Tesla and never have to worry about oil changes, here’s another example. I recently received a letter in the mail from my health insurance provider notifying me of an alternative medication that costs less money (I like saving money because, well, I like money). I scanned the letter and set a reminder for the exact time of my next doctor’s appointment. Assuming the notification works, I’ll get pinged at the exact time I’m meeting with my doctor.

Another technique I use is the concept of “living” notes. I’ve defined living notes as a note which continues to grow over time. This can be a list of books I want to read, favorite podcasts, restaurants I want to check out – you get the idea. I tag these notes as “living” and periodically check them. A different scenario for a living note may be, I tag a note as “delete” when moved from my Inbox, but plan to go back and delete later. A good example of this would be a grocery or wish list – it doesn’t really need to stick around forever.

What do you think? Seem too complicated? Don’t see the benefit? Doesn’t work for you? Feel free to leave your comments. It may not be for everyone, but I couldn’t feel better about making the decision of going completely paperless. I’m finally able to find things, and I don’t have to think so much about what to keep, and what the throw away (a nice added plus is I can find things wherever I am since my “magical box” is inside my smartphone!) In addition to eliminating the physical clutter, it’s also a great way to rid my brain of clutter. I’m a strong advocate of getting thoughts out of the brain so it can be filled with more important stuff. The followup article to this paperless process is coming soon: I’ll explain how I use Trello to better manage ideas and thoughts. An important part of this whole thing, though, involves jotting down notes. An important part of jotting down notes is making it super easy and being able to find them later. Give it a try and let me know what you think!

So that’s it! Now you know how I managed to rid my life of clutter forever. Next up? Tackling dog toys left all over the apartment…

Special thanks to Sarah Showers and Shane Afsar. Also published on LinkedIn.